The Start: True to Montessori, We Always Follow the Child.

At our previous campus on John Barton Payne Road, we were fortunate to have 7 acres of beautiful open space laden with a variety of  native  trees.  As the trees naturally dropped old limbs, the  children would eagerly collect them in large piles. Slowly, a city of tepees emerged in the field as the children used their creative energy to build their tepees. Each one was unique to the residents within. Over time, they began to incorporate other materials such as long grass for roofs and colorful items from home to decorate. We could see that the children really loved this imaginative free-play and were quite serious about it. One house might have their branches decorated in beautiful pink ribbons with a pulley system to gain access, while another might be all about defending their castle. It also became fertile ground for conflict resolution as children navigated all the verbal jousting that can take place on the playground. As Stick City became more organized, the children began to create small businesses. There were pet sitting tepees, beauty parlor tepees, supply store tepees (sticks and dried grass), and even a luxury tepee with rooms for rent. A monetary system  soon evolved. At first it was leaf money, which was quickly replaced by rock money as the rocks were not as readily available as the leaves. Stick city became a democracy where children made the rules, with supervision, of course! As the city, with all its rules and regulations unfolded, so too did the children’s emotional intelligence. These children were self-constructing, shaping their brains, feeding their imaginations, invigorating their souls – not to mention reaping the most quintessential benefit of play: the pure and simple pleasure of it.

The Move: From Stick City to Bamboo City.

As the school grew, so did our need for a larger place to call home. We moved to our current campus in 2015. While the new location was beautiful, it lacked the trees and branches the children had become accustomed to having, so we came up with a solution: bamboo! A local family was willing to let us clear their overgrowth of bamboo and take it back to the school. Armed with hand saws, hacksaws, trucks and a large trailer, we set out  with a group of willing parents to harvest as much bamboo as we could fit in the trailer. When we returned to the school the children were overjoyed to see so much bamboo. We divided them up among the children and they immediately set to work building tepees.

Over the subsequent years, the bamboo became brittle and the much loved tepees became structurally unsound. Thanks to a generous parent who donated a lot of fence boards and spent a weekend working on the houses, the structures became more permanent and had windows and other features added. They were mulched on the inside and flowers planted on the outside. They were given lovely coats of red, blue, and green paint thanks to Lower Elementary students and their parents. We have since received a donation of metal roofing and hope that we can install the roofing this year. As always, we depend on the kindness and support of our parent community to achieve this. We meet

with the children at the

beginning of each year to go over the already established rules and assign houses. They decorate their cottages and really take ownership of their “house”.  A democratic system has emerged including a monetary system and laws. What began as a simple Stick City has now been transformed and renamed Cozy Cottages. These Cozy Cottages have become a wonderful learning opportunity and delightful addition to the Mountainside experience.

https://mountainsidemontessori.com/wp-content/uploads/2022/09/Blog-Header-6-×-4-in.png 1200 1800 Jessica Bridges https://mountainsidemontessori.com/wp-content/uploads/2017/12/new-logo-for-web-01-300x83.png Jessica Bridges2022-09-12 11:43:172022-09-14 09:49:55Stick City: A Story of Following the Child
“From a distance there is harmony
And it echoes through the land
It’s the voice of hope
It’s the voice of peace
It’s the voice of every man”
-Julie Gold
In lieu of our traditional End of the Year picnic and soccer game, our Mountainside community came together in typical joyous fashion for a drive by parade. With the campus decorated with balloons and signs and with music blasting, the school came alive as families drove down the driveway toward dancing and waving masked Mountainside staff.  As their cars rolled slowly by, we all shared our hellos and goodbyes, our wishes for good health and a good summer, and our longing hopes to be together again. Fond memories of the day: smiling faces, distant waves, hollered hellos, hand painted signs, dancing staff, decorated vehicles, honking horns, a few tearful moments, and lots of love behind everyone’s eyes. Thank you to our wonderful Mountainside community – it truly was a special day. 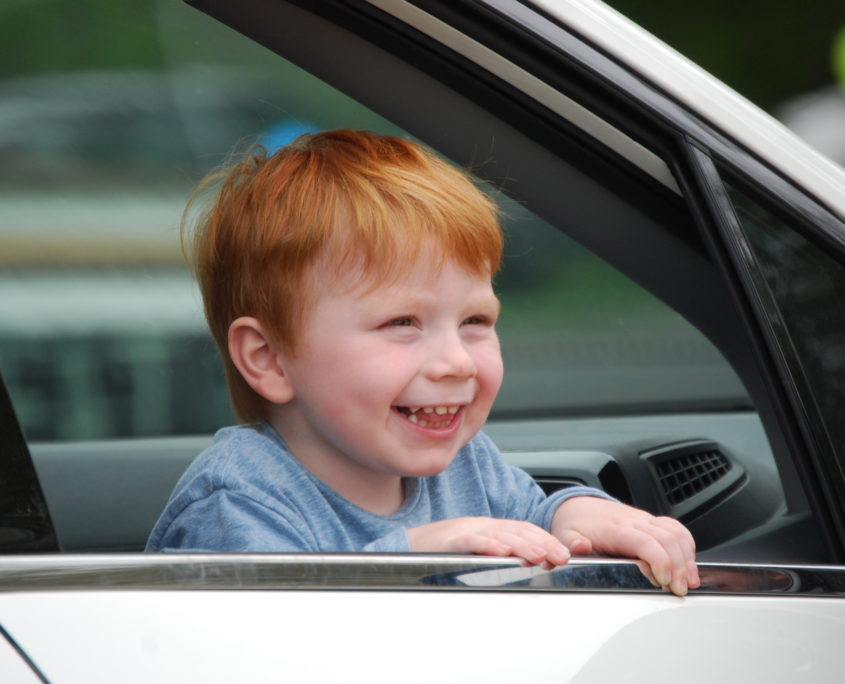 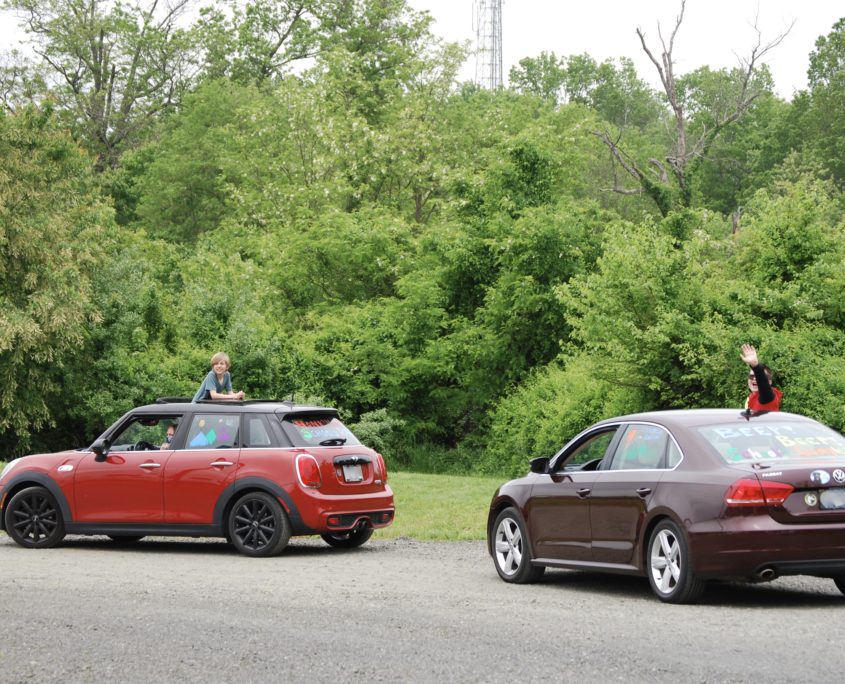 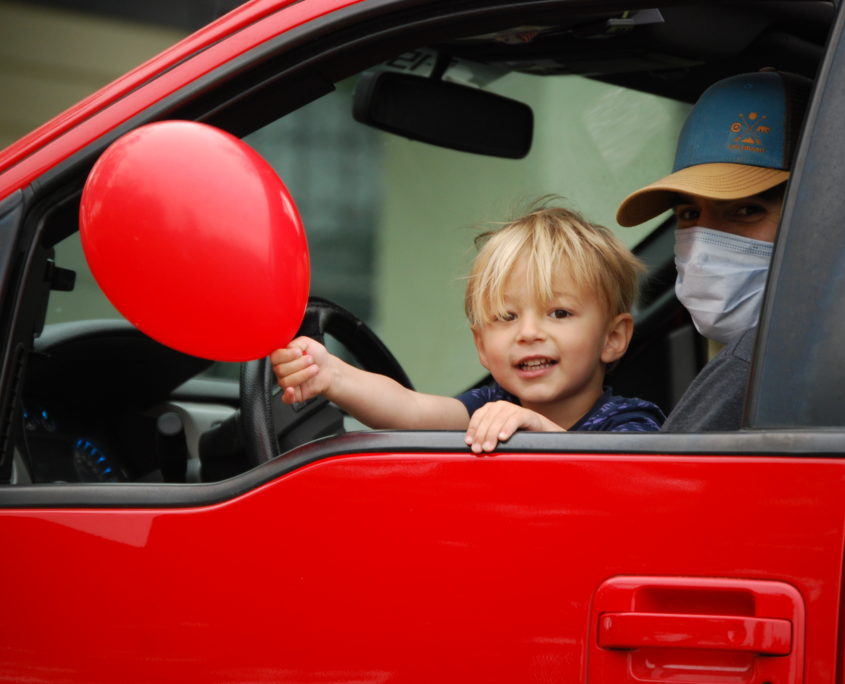 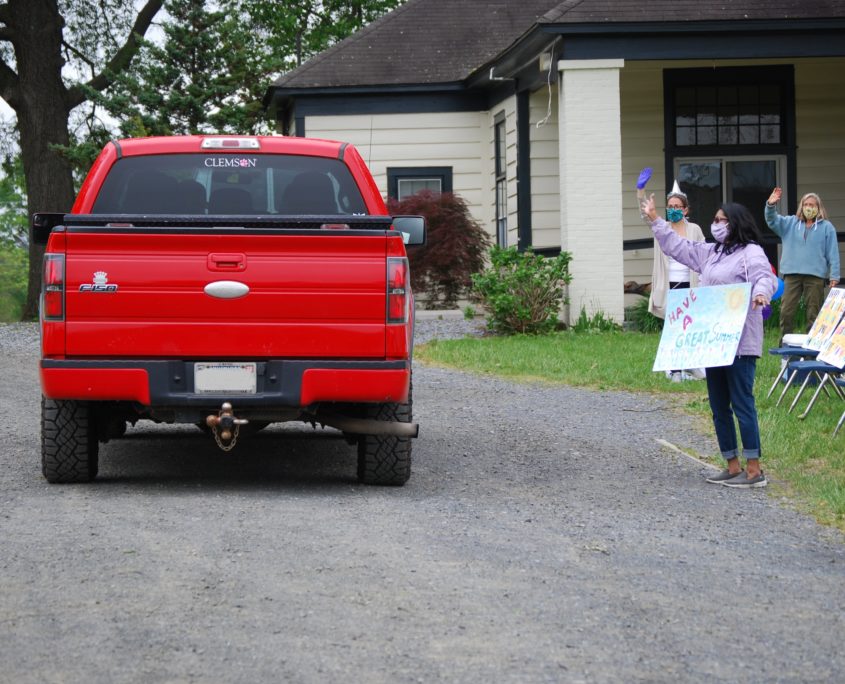 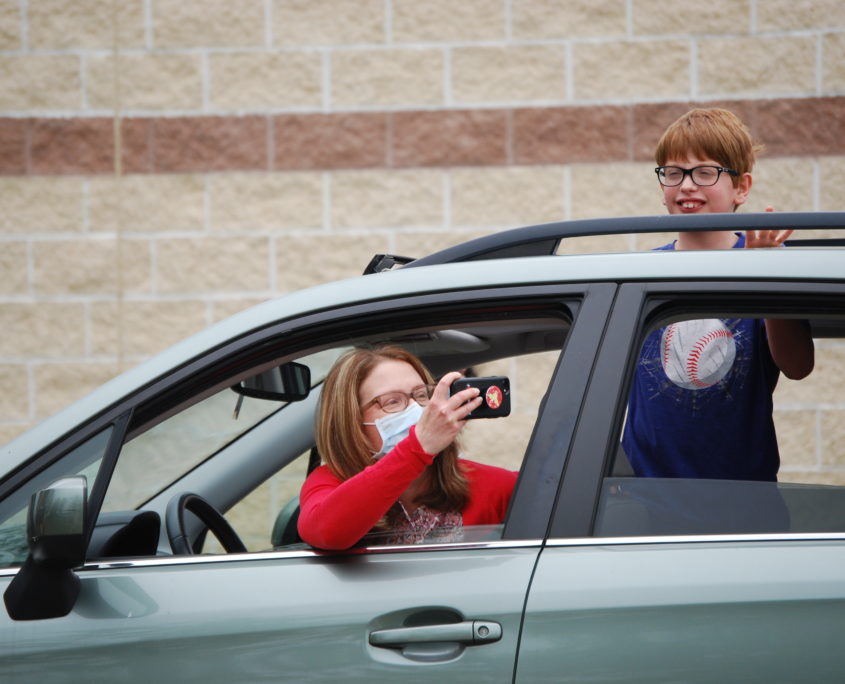 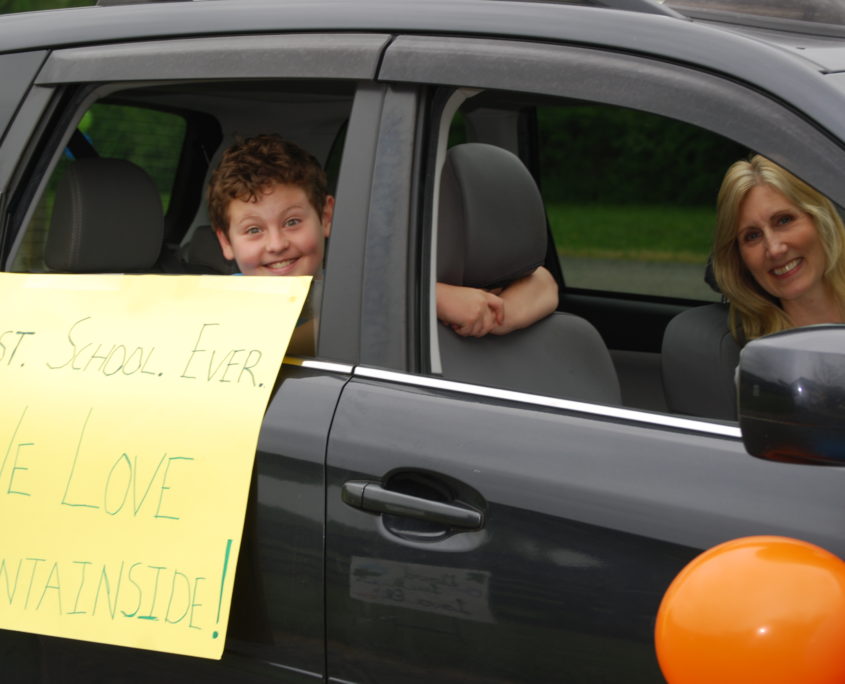 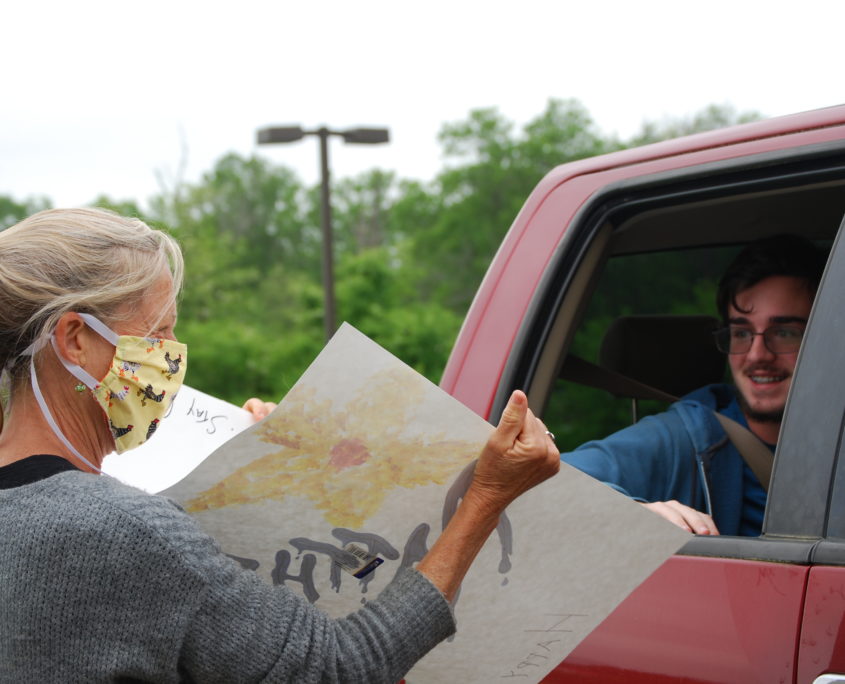 We have been so touched by everyone’s support and enthusiasm to help us provide as much consistency and normalcy to the students’ education as possible during this time of distance and Learning from Home. We wanted to find a way to represent this unity and have all the students participate in creating something together.

We decided on an outdoor mural, located on the barn on campus, for all the children to paint. An outline of the mural was created by Ms. Rubin and painting supplies were provided. With the help of an online schedule, families have been coming by one at a time to paint a section of the mural.

We are very excited with the progress! It is our hope that the finished mural will stand as a permanent reminder of our community working together despite the need to be physically apart during this time. 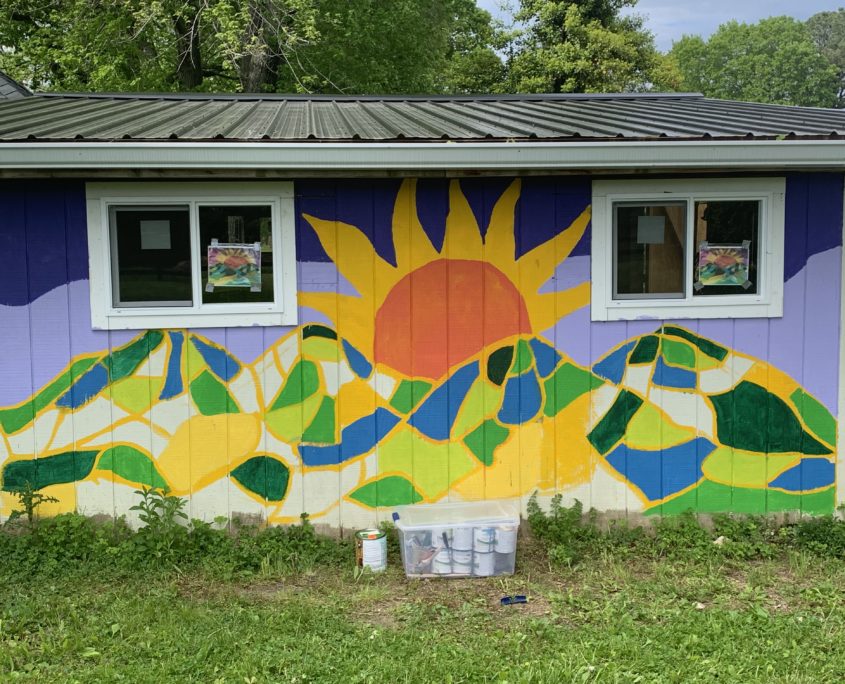 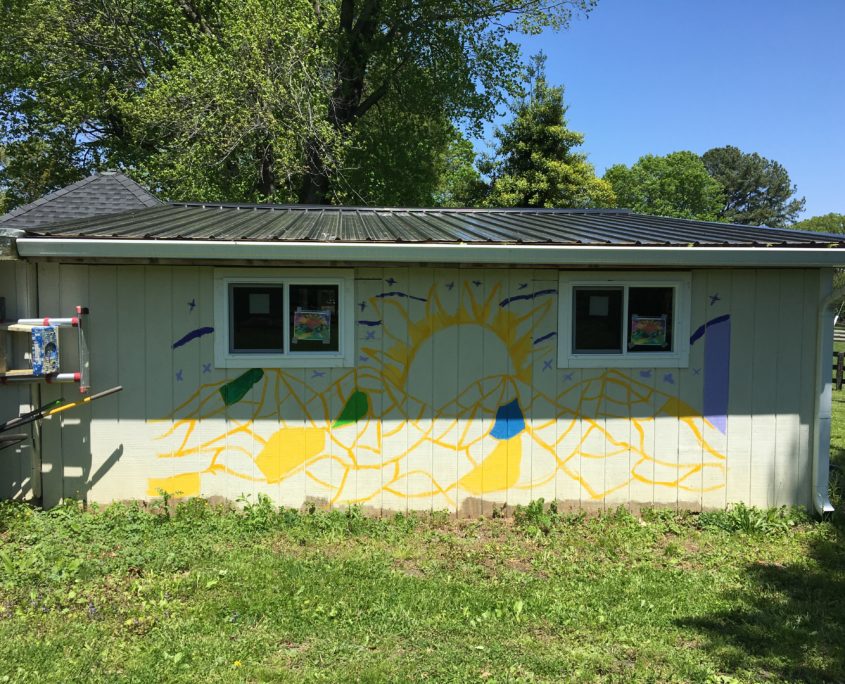